Barking up the right tree.

A treehouse is a rite of passage for many kids, their first home away from home, the first place they can call their own. 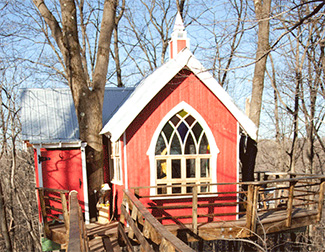 For Pete Nelson, owner of Nelson Treehouse and Supply, a treehouse isn’t just a right of passage, but a place to relax and even work and live.

There aren’t many people who can claim that they get to build treehouses for a living. Pete’s company is one of the few treehouse builders in the world and one of the most well-known, in part because of Treehouse Masters, a highly successful Animal Planet television series starring Pete and his team.

Given the state’s expansive forests, it shouldn’t come as too big of a surprise that the #1 treehouse manufacturer and supply company in the world would be based in Washington. Located in Fall City near Seattle, the company has made treehouse owners’ dreams come true for more than 25 years.

These aren’t the treehouses you remember from your childhood, patched together with old boards and bent nails. Pete and company’s treehouses can end up being several hundred square feet in size and cost anywhere from $150,000 to $365,000, depending on the size, features and extras. Each treehouse is unique, built to fit into its natural surroundings as well as the trees that support it. They are highly customized structures where ingenuity, imagination, engineering and artistry come together to create beauty and harmony.

Pete got the treehouse bug when he was just five years old. His dad built him a tiny one behind the garage in New Jersey. Even after graduating from college with a degree in economics, Pete still wanted to build treehouses. Today, he not only gets to pursue his passion, but has since branched out into a treehouse retreat called TreeHouse Point, where guests can relax among the soaring firs, several coffee table and how-to books and even special equipment for do-it-yourselfers.

Some of his projects are simply amazing. Treehouses can have every modern convenience a home has, from running water and flat screen TVs to a Japanese Tea House.

According to Pete, the success of any project depends largely on finding just the right stand of trees. Trees have to be healthy and still in their growing phase, so they will welcome the addition of a treehouse without suffering from any ill effects. Unlike the treehouses we built as kids where big spikes where driven into the tree’s trunk, specially designed anchors don’t hurt the trees and allow them to continue to grow and sway in the wind unimpeded.

For those thinking of building their own treehouse, Pete recommends Douglas fir and red cedars for their strength, durability and beauty. Cottonwoods are the worst, as they can break apart even on the nicest of days.

The day may not be too far away when entire treehouse communities begin to spring up. In South America and Japan, treehouse developments of 600 or more have been pre-selling very successfully and local permitting agencies in the U.S. are becoming more open to including regulations for treehouse construction.

Of course, people are welcome to take one for a test drive at TreeHouse Point. A family business, the resort sells out regularly as adults excitedly reclaim their youth for a weekend, reveling in far more luxurious accommodations than they could have ever imagined as kids.

Nelson Treehouse & Supply, another one of the many Business Legends in Washington State.