Nostalgia in a bottle. 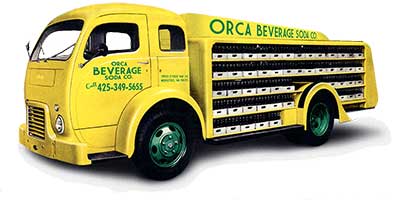 If you still remember sugary soft drinks by the name of Moxie, Dad’s, Nesbitt’s and Bubble Up, you can thank Mike Bourgeois and his Mukilteo, Washington bottling plant for keeping those memories alive.

Created in the 1980s, Orca Beverage currently bottles 100 local and regional favorites at its small craft bottling facility in Mukilteo, about 30 minutes north of Seattle.

For Mike, it was something of a hobby at first. He gained his appreciation for the “new age beverage category” when he was in business school at Seattle University. The category was an extension of the traditional carbonated soft drink industry, but offered up alternatives to the mainstream brands.

The early innovators of this category included Original New York Seltzer and Clearly Canadian, which not only promised actual health benefits, but were made with real fruit juices and extracts, not an exotic list of hard to pronounce lab chemicals.

Turning a hobby into a business wasn’t easy. Some of Mike’s original formulations, such as Orca Sparkling, had almost 50% fruit juice from Northwest processors in them. The juice particulates tended to gum up and jam the bottling equipment at his contract bottlers, so much so that three of them asked him to take his business elsewhere.

Through a lot of trial and error that followed, Orca Bottling slowly learned the craft of artisan soda manufacturing. Realizing they needed their own bottling facility, the company bought the equipment from a Pepsi bottling plant that had been declared a total loss in a flood. Mike and his team spent two years rebuilding the equipment from the ground up. To their credit, the companies that had turned down his contract business came to the aid with additional equipment, parts and expertise.

With a new production line ready, Orca started turning out bottles of the sweet stuff. Looking for new markets, Mike stumbled on the idea of retro sodas, cashing in on America’s nostalgia craze and his own fond memories of his youth growing up in the 1950s and 60s.

Since then, the company has made deals or figured out the recipes for more than 100 retro and specialty drinks, all served up in glass bottles using real cane sugar, just like the originals. Some of their familiar brand names include Brownie, Bubble Up, Dad’s, Goodie, Jic Jac, Kickapoo Joy Juice and Moxie. Many of these had faded from grocery shelves and consumer minds decades ago; others are relative newcomers with a new twist and some nostalgic flare, such as Earp’s Original Sarsaparilla.

Next time you’re in the market for nostalgia in a bottle, stroll right by the Pepsi and Coke racks and look for those blasts from the past that will rocket you back to your childhood. And while you’re there, be sure to thank Mike Bourgeois and Washington’s own Orca Beverage for making it all possible.