Just two years after women in Washington State won the right to vote, an entrepreneur known only as Mrs. Jones decided she wanted to open a bakery at a time when few women owned a business. The city clerk appeared so shocked that the business license granted in 1912 listed the owners only as “Mrs. Jones and two of her friends.” 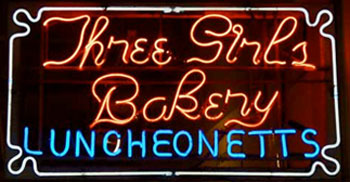 Little did the clerk know that the business the women started would reach a rare milestone in the business world – the century mark.

Yes, Three Girls Bakery is still in operation today, celebrating its 100th year in business in 2012. And though you won’t find the original ladies at the counter any longer, you’ll still find wonderful pastries and sandwiches that have earned a very loyal following.

Moving into the Corner Market building, which was only five years old in 1912, the Three Girls Bakery became an instant success. The bakery was downstairs with an ice cream parlor and coffee shop above. The girl’s specialty was coffee cakes rolled in creamery butter, according to the current owner, but the real draw was the state-of-the-art doughnut maker.

Business was booming and the Three Girls Bakery opened more stores as well as a wholesale bakery that turned out 100,000 loaves a day. Bread sold for two loaves for just 15¢, often delivered by horse drawn carriage. By 1919, there were eight Three Girls bakeries around Seattle.

After passing through a string of owners, the bakery found a new owner in 1979 and it’s been in the family’s hands since. Three Girls Bakery is back to a single shop, but as any owner knows, it’s not the size of the business that is a measure of success, but the loyalty of its customers. And in this regard, Three Girls is a business giant.

Best of all, the new owners have brought baking back to Three Girls Bakery. After years of farming out the pastry making, fresh pastries connect the business back to its roots. Family members learned on the job, tweaking recipes to make them Three Girls originals, including customer favorites, the shortbreads and rugelachs.

A century of know-how and quality goods seems to have hit the mark. Three Girls doesn’t advertise – new business arrives purely by word of mouth, customers bringing in new customers.

Want to visit Three Girls Bakery? Don’t bother trying to find their website, as we said, they don’t advertise. They are old school. But they are open 6 a.m. to 6 p.m. daily in Stall 1 of the Sanitary Market Building, 1514 Pike Place.