Taking on a behemoth that commands a 70% share of the snack food market would be ill-advised at best.  But take a little entrepreneurial chutzpah and blend it with breathtakingly original flavors and a signature crispy crunch, and you’ll end up with a Washington business legend that did just that – Tim’s Cascade Snacks potato chips. 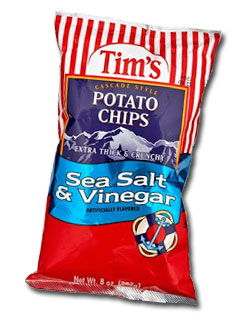 Tim’s traces its origins back to 1986, the year Tim Kennedy, some members of his family and business partner Jeff Leichleiter decided they wanted to go into the potato chip business. These weren’t your ordinary potato chips – thin, greasy and lackluster. These were gourmet potato chips:  thick-sliced, spiced by hand (originally) and stirred with special rakes in a patented cooking process that causes the potatoes to fold like a fortune cookie, increasing their crunch quotient.

Armed with some surplus chip fryers from Nalley Fine Foods, the founders went to work in a 15,000 square foot warehouse in Auburn, Washington. Since most of their startup money went into the equipment and facility, marketing funds were virtually non-existent. Undaunted, the company went guerilla, delivering samples to area convenience stores and gas stations and handing out free chips at events, all in an attempt to build a following.

The plan worked better than anyone imagined. Tim’s Cascade Snacks potato chips became a huge hit and began to find their way into bigger and bigger retailers.

That’s when another Northwest business legend came calling – Costco. Looking to expand its own market share overseas, Costco asked if another brand of Tim’s Cascade Snacks, Hawaiian Sweet Maui Onion Chips, could be carried in their stores in Japan. The Asian market not only loved the Maui Onion flavor, but Tim’s Jalapeno chips as well.

This emphasis on local flavors and business partners extends to the potatoes themselves.  More than 80% of the 40 million pounds of potatoes used annually come from local farms, including those in Quincy, Toppenish and Ellensburg.

So what else sets Tim’s apart from other potato chips on the market? For starters, the company doesn’t make chips until an order is placed for them. They have perfected a lean ordering system that only goes into full production when an order comes in. Only then does the production team map out the cycle, contact the vendors for corn oil and spices and order up the potatoes from the growers to guarantee a fresh raw product. Since Tim’s potato chips are made without preservatives, they only have a 15-week shelf life, so controlling time to market is critical, especially when shipping overseas. Thanks to the company’s proximity to the Seattle and Tacoma ports – the third largest container complex in North America – overseas orders can be delivered to Asia-bound ships within hours.

In addition to being obsessed with flavor, freshness and quality, Tim’s Cascade Snacks has been committed to being a good steward of the environment and has been honored with numerous awards for environmental excellence in water conservation, pollution prevention and packaging reduction.

It has also been honored multiple times by the Association of Washington Business as a great place to work. Tim’s employs 85 workers in its plant, and many of them have been with there since the company was started. In sharp contrast to often faceless corporate cultures, Tim’s staff still gather for barbecues and support their kid’s Little League teams as this one-time family owned business has become a family in its own right. Tim’s is truly a Washington State business legend, born out of an entrepreneurial spirit, grown through constant innovation, and beloved by customers far and wide.